Scarlett Johansson has revealed to being unable to quit smoking since she was 15 years old. 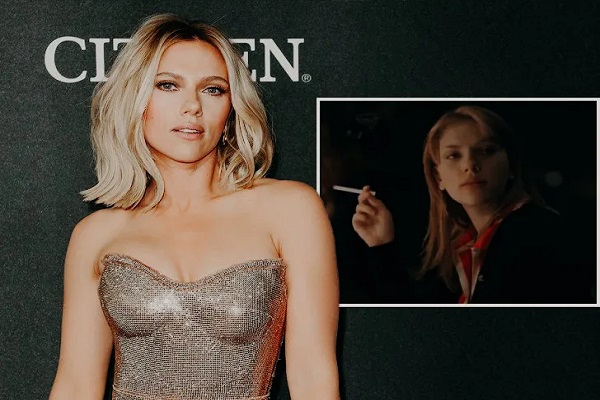 Scarlett Johansson has done a wide range of roles in her acting career. And a few of them, such as Charlotte from Lost In Translation (2003) and Nola Rice from Match Point (2005), have a smoking habit.
Johansson is a smoker in real life, just like these characters. She began smoking at the age of 15 and has stated that she is unable to quit.

Johansson and her prep-school lover Jack Antonoff were dubbed the “Cheech and Chong of the Professional Children’s School” by a friend in 2014, after the renowned comedy pair Cheech Martin and Tommy Chong, who are most known for their marijuana-themed humour.
On their prom night, Johansson and Antonoff smoked so much pot that their limo driver had to urge them to stop.

Though Johansson had previously been unable to quit smoking, she may have changed with her second pregnancy. During the filming of her current film, Black Widow, the actress kept her pregnancy a secret.
It’s been suggested that Johansson has been doing interviews and events virtually to promote Black Widow in order to maintain a low profile. Colin Jost, her spouse, will be the father of this child.
A insider told Page Six that Johansson was expecting a baby soon, while another stated she was keeping a low profile.

On August 30, 2014, Johansson had her daughter Rose Dorothy Dauriac with ex-husband Romain Dauriac.

Colin Jost and Scarlett Johansson Johansson and Jost met on Saturday Night Live somewhere between 2006 and 2010. And, despite the fact that they had known each other for a long time, they didn’t start dating until 2017.

The couple’s relationship was confirmed in May 2017 after they were photographed kissing at the SNL afterparty.

In November 2017, they made their first public appearance as a couple when they attended the 2017 Museum Gala at the American Museum of Natural History in New York.
In May of this year, the Black Widow actress and Jost announced their engagement, and when she returned to host SNL in December of the same year, she said it was a special place for her.

“I just want to say that this place means so much to me. I have so many friends here, and I met the love of my life here. “

In October 2020, Jost and Johansson married.

The Oscar-nominated actress had previously been married twice before meeting Jost.

She married Romain Dauriac on October 1, 2014, after divorcing from Reynolds, and they divorced on September 12, 2017.