Pastor Keion Henderson and His Wife: Did They Get Divorced? 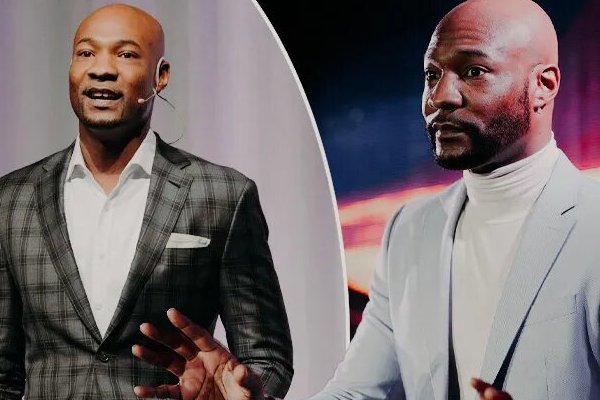 Keion Henderson is a preacher who is well-known for his ageless wisdom and guidance, notably on dating, marriage, and cohabitation. Despite being a maestro of all things love, the preacher couldn’t keep his own marriage together.

In 2015-2016, Keion had a relatively good marriage with his ex-wife Felicia Henderson, at least according to his social media. The couple, who have two kids, seldom spoke about their marriage. Although Keion did post a photo of his wedding day on Instagram.

On his wife’s birthday in 2016, the pastor raved over her in a now-deleted Instagram post, calling her a “timeless treasure.” There were additional postings of birthday surprises, implying that their marriage was doing well.

Lady Felicia was not only his wife but also a professional partner in Keion’s life. They collaborated at the Lighthouse Church and developed various ventures together, including the Sugarland Campus.

Keion told Chron in September 2019 that an African prophet had dreamed about Keion and his wife preaching in Sugarland, which came true when the two of them co-founded a Lighthouse Church branch.

Keion also discussed how he and his wife co-led a church in Houston, Texas, in the same interview.

Despite the fact that their personal and professional bond seemed to be strong, their marriage ended in 2019 when he purportedly filed for divorce.

Larry Reid, a vlogger, obtained their court paperwork and posted them on his Patreon account for everyone to see. The pastor had really filed for divorce, according to the document.

Reid also claimed in a video that before the divorce was finalized, Keion indicated his marriage was “going through adjustments.” Later, in an interview with BlessedBeatz Media, the Pastor acknowledged the divorce.

The Divorce Was a Good Thing, Even if It Was a Difficult Step

The pastor’s divorce must have been difficult. He was pushing people to embrace love, but he was breaking down himself.

Pastoring to a megachurch, he revealed with BlessedBeatz that he was learning how to boldly navigate through that season – the season of separation.

I was terrified… [God] wasn’t wiping away my tears.

People found his words of wisdom obvious and relevant since he had had his fair share of ups and downs. His life experiences have taught him how to see beyond the difficulties of one’s present situation and see the wider picture.

The preacher emphasizes transitional moments between difficult and better times in his book The Shift. The book features a chapter devoted to divorce and its occurrences, with the major topic being transitioned that occur all around you every day.

Keion Henderson and Shaunie O’Neal Have Confirmed Their Relationship

Henderson has rekindled his romance!

Shaunie O’Neal, star of Basketball Wives, wished Keion a happy birthday on Instagram on July 6 with a romantic message that also verified their relationship.
O’Neal raved over Keion in her long love-filled remark, calling him “my safe haven where I can honestly develop without criticism.” She admires his unwavering affection for her and her children. They’ve also shared more photos of each other being lovely.

The lovebirds haven’t been together for a long time, but they met in 2019 when Shaunie attended one of Keion’s conferences.

From 2002 until 2011, Shaunie was married to ex-husband Shaquille O’Neal. Amirah, Shaquir, Shareef, and Me’arah are the couple’s four children. Miles, her son from a prior relationship, is also hers.

Related Posts of Pastor Keion Henderson and His Wife: Did They Get Divorced?