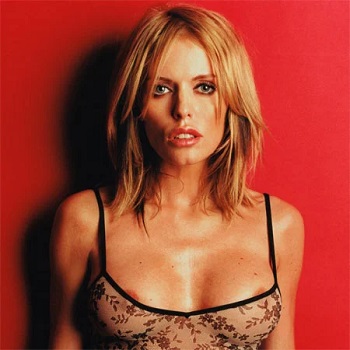 Known for her work in films like Lethal Weapon 2, Patsy Kensit is an English actress. Additionally, she’s a singer, a model, and a child artist. From 1983 through 1989, she was the band’s lead singer.

Between 2004 and 2006, she portrayed Sadie King on the ITV serial drama Emmerdale. From 2007 to 2010, she portrayed Faye Byrne in the BBC One medical drama Holby City.

Dan Donovan, Jim Kerr, Liam Gallagher, and Jeremy Healy have all been her husbands.

Patsy was born on March 4th, 1968, in New York City, New York. She’s been married four times. She’s been divorced three times and is currently separated from her fourth spouse. In the band Eighth Wonder, Patsy was the lead singer. Patsy returned to television acting in Emmerdale, an ITV soap drama.

Patsy was raised in an odd family. Her father was descended from a long line of career criminals. One of the notorious London gangsters known as the Kray twins had a close relationship with Mr. Kensit, and he also ran long firms for the Kray twin’s rival Richardson.

“Jimmy the Dip” was the moniker given to Mr. Kensit by his friends and fellow students. Patsy’s father was in prison when she was born, and Patsy grew up thinking he was an antique merchant. Her granddad was a thief and counterfeiter as well. Kensit went to Corona Theatre School.

Patsy Kensit began her career as a child artist in a Birds Eye Frozen Peas TV commercial when she was just 4 years old. With For the Love of Ada, she made her debut on the big screen as a young actor. She appeared in The Great Gatsby as Mia Farrow’s daughter two years later. As Mia Farrow in Love and Betrayal: The Mia Farrow Story she appeared in 1995.

Additionally, Patsy starred in a BBC miniseries based on the best-selling historical novel Penmaric. Patsy studied acting at the Italia Conti Academy in Rome. The Adventures of Pollyanna’ and ‘Luna’ were two of the British children’s television programs she appeared in as a kid star.

Patsy played Estella in the BBC adaptation of Great Expectations. As Lady Margaret, she appeared in a 1982 BBC Television Shakespeare production of Richard III. Patsy was pursuing both a singing and acting career at the same time during her ascent to fame.

As based on Colin MacInnes’s novel as possible, Patsy sung a song titled “La luce buona delle Stelle” in her film adaptation of Absolute Beginners in 1986. An Italian singer and songwriter by the name of Eros Ramazzotti lent his vocals to the song.

In the late ’80s, Kensit’s band, Eighth Wonder, enjoyed great popularity. Both of the band’s songs, I’m Not Scared and Cross My Heart, made it into the top 40. On Top of the Pops, Eighth Wonder also made an appearance, but its popularity shortly waned.

Her band’s song “I’m Not Scared,” which she sang in 1989 for the film Lethal Weapon 2, was featured in the film. When she starred in ‘Twenty-one’ in 1991, she was nominated for an Independent Spirit Award for Best Female Lead after her performance was widely lauded. A British film called Blame it on the Bellboy was Patsy Kensit’s next. In addition to Angels & Insects, she had a starring role in The One and Only.

Patsy has been in numerous shows on television. In 2004, she joined the cast of Emmerdale, a British soap drama. As Sadie King, Patsy portrayed her on-screen. Other notable TV appearances include her seventh-place finish on BBC’s Strictly Come Dancing season 8 in 2010 with partner Robin Windsor.

Patsy Kensit’s worth is estimated to be in the millions of dollars.

As of right now, Patsy Kensit has an estimated net worth of $10 million dollars. Advertisements for Birds Eye frozen have featured her. Two British Soap Awards, an Independent Spirit Award, a National Television Award, and a Young Artist Award have all been nominated for her work in soap operas.

The Private Life of Patsy Kensit

This is Patsy Kensit’s fourth failed marriage. Dan Donovan, a member of the band Big Audio Dynamite, was her first husband, whom she married in 1988. Simple Minds frontman Jim Kerr was her second spouse. It was 1992 when they married.

During her second marriage, she had a child named James. Liam Gallagher, a member of the band Oasis, was Patsy’s third husband.

Her second child was born on September 13th, 1999, and was given the name John Lennon in honor of her husband. In 2000, the couple split. Alleged affairs with Ally McCoist and rap artist Killer Kela have been mentioned in the press.

When Patsy announced her engagement to DJ Jeremy Healy on November 29, 2007, it was reported on March 31, 2008, that the wedding had been canceled. Finally, on April 18, 2009, they tied the knot. They divorced in February of that year.

She got an ovariectomy in September 2011. Her ovary had been found to have an 18-inch tumor. A hysterectomy was performed in June 2013 after physicians discovered two 6 cm large cysts in her reproductive system.

Patsy Kensit has a height of 5 ft 5 in. It is 34-25-34 for her body type. Despite her enviable physique, this blonde actress has no plans to have any more children.