For more than two decades, Ming Tsai and his wife Polly Talbot have been happily married. 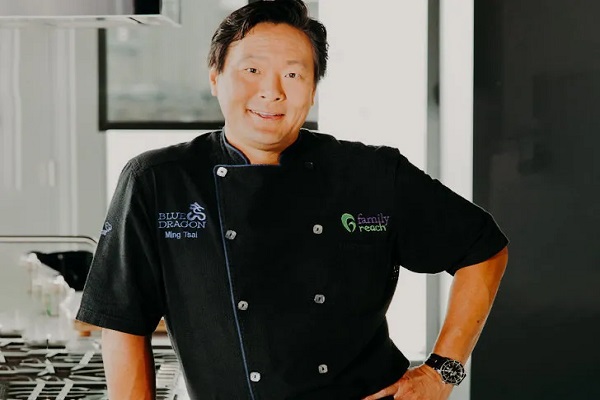 Ming Tsai had everything going for him, from cookbooks to an Emmy Award, until his wife’s disease took precedence over everything in his life.

Ming and his sons were devastated when their mother, Polly Talbot, was diagnosed with lung cancer. They all stood by her side and promised to help her fight it, no matter how slim her prospects of survival were.

Despite widespread predictions that she would die soon, Tsai’s wife has made a remarkable recovery – and is still alive.

Ming’s wife was diagnosed with lung cancer at stage four

Tsai was honored with the ‘Impact Award’ at the ‘American Cancer Society’s California Spirit 33 Gourmet Garden Party’ in 2018 for his tireless efforts with Family Reach, a nationwide charity that assists families facing financial hardships as a result of cancer.

It was at that time that he informed his wife of her condition. In October 2017, he reported that his wife was also diagnosed with stage 4 lung cancer.

He went on to say that the Tsai family stood by Talbot’s side to ensure that she felt normal.

Talbot, Tsai’s wife, is currently undergoing a $17,000 pill treatment. Despite the fact that she only needs to take one medication each month and is recovering well, the financial burden is clear.

Talbot, the award-winning chef’s wife, is currently alive and appears to be in good health, according to a recent Instagram post by Tsai.

This message also served as a response to many people who were curious about Talbot’s health when he was diagnosed with cancer.

More importantly, the Tsai family has demonstrated that cancer can be overcome with the love and support of one’s family.

Since 1996, the couple has been married. David and Henry are their two boys.

Ming Tsai is a man on a quest

Tsai maintains a humble and down-to-earth demeanor despite having thousands of followers on social media and numerous prestigious prizes adorning his home.

Because of his wife’s condition, he became aware of the financial difficulties that others endure in similar situations. As a result, he now works to assist such people through Family Reach, in the hopes that it will provide them with tremendous support and enable them to heroically weather the storm.

He also introduced ‘MingBings,’ a line of exceptionally nutritious vegan patties that will aid cancer research. The Dana-Farber Cancer Institute receives a portion of the proceeds from this campaign. Tsai’s wife has been receiving treatment at this facility for the past three years.

Even a portion of the proceeds is donated to Family Reach.

Tsai, who comes from a family of foodies, is a philanthropist who believes strongly in human values. In 2010, he met Darlene, a cancer patient who had expressed an interest in dining at his Blue Ginger restaurant.

He prepared the supper for Darlene and her family and attended to them individually. He learned about the burden of cancer through Family Reach, and when his wife was diagnosed with lung cancer, he understood exactly what she would face.

Despite the obstacles, he continues to offer gourmet fare and hopes that at least one of his two kids will choose to wear the Chef’s hat. After all, it’s in the blood!