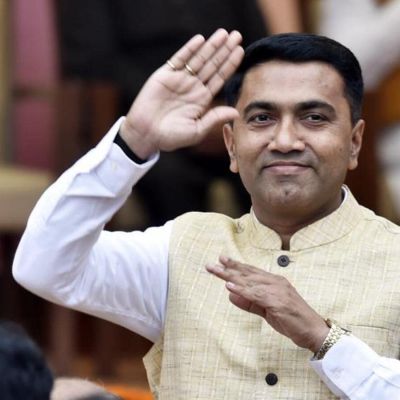 Do you know Who is Pramod Sawant?

Pramod Sawant was born on April 24, 1973, in Bicholim, North Goa, to a humble family. He has 46 years of age (as of 2019). Pramod was born in Sanquelim, a town in North Goa. Mr. Sawant is an Ayurvedic practitioner in addition to being a politician.

In 1996, he got his Bachelor of Ayurveda, Medicine, and Surgery from the Ganga Education Society’s Ayurvedic Medical College in Kolhapur. He also earned a Master of Social Work from Tilak Maharashtra University in Pune in 2010. Pramod Sawant joined the RSS at an early age and quickly rose through the ranks to become an active Sangh Pracharak. He quickly ascended in the RSS ranks.

Mr. Sawant had a strong friendship with Manohar Parrikar. He is regarded as Manohar Parrikar’s protege. Mr. Sawant, like Parrikar, has maintained the image of an ordinary guy and speaks the common man’s language.

Pramod Sawant belongs to the Maratha Kshatriya community. His father’s name is Pandurang, and his mother’s name is Padmini Sawant. Pramod Sawant is married to Sulakshana, a chemistry lecturer at Shri Shantadurga High School in Bicholim.
Sulakshana Sawant is a BJP official who served as the president of the BJP Mahila Morcha in Goa. Parthivi is the couple’s daughter.

Manohar Parrikar pushed Pramod into active politics after he was actively connected with the RSS (Rashtriya Swayamsevak Sangh).

Pramod joined the BJP and quickly rose to the position of state president of the Bharatiya Janata Yuva Morcha. Mr. Sawant was elected to the Goa Legislative Assembly in March 2012 from the Sanquelim Constituency.

Some Other Additional Facts About Pramod Sawant