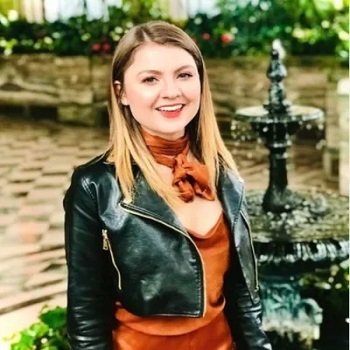 Indeed, social media has provided a venue for showcasing talent, not to mention fame and a substantial sum of money. Rebecca Felgate, a social media personality, YouTuber, and writer from the United Kingdom, is best known for hosting the YouTube channel’s Most Amazing Top 10 and Life’s Biggest Questions. She focused on her own enterprise as a digital content provider after quitting those channels. Felgate has also been a feature writer for the Toronto Guardian since 2015. She is dating Danny Burke, who is her boyfriend.

Rebecca Felgate’s Early Years and Education: How Old Is She?

Rebecca Felgate was born on January 7, 1989, in Toronto, Ontario, Canada, but spent much of her childhood and early adulthood in London, England. She returned to her birthplace of Toronto in 2015. Her nationality is British, and she belongs to the Caucasian ethnic group.

Her mother and sister Alexa apparently call her Beck Beck Bundles, despite the fact that most of her family history is now unknown. After attending Hills Road Sixth Form College from 2005 to 2007, Felgate enrolled at Goldsmiths College, the University of London in 2007 and graduated in 2010 with a First Class Honours BA in Drama and Theatre Arts. She went on to get a Post Graduate Diploma in Newspaper and Multimedia Journalism after that. Rebeca is 32 years old and stands 5 feet 3 inches tall as of June 2021. Capricorn is her zodiac sign.

On June 27, 2013, Rebecca Felgate launched a self-titled YouTube channel. Her debut video, Gin in a tin REVIEW | The ultimate Gin Review from two British experts! was uploaded in 2015.

Her YouTube account has around 127K subscribers and 6.92 million views as of mid-2021. Personal adventures and travel blogs, drink recipes, and cuisine blogs are the majority of her videos. Finding SLYTHERIN MINIONS in Hogwarts Mystery, Sociopaths in Harry Potter, HARRY POTTER ZOOM Challenge, and many others are among her most popular videos.

Rebecca has her own website now, rebeccafelgate.com. The English social media star has been a feature writer for the Toronto Guardian in Canada since September 2015.

For those curious about how Felgate rose to prominence, from October 2015 to 2019, she hosted the YouTube channels Most Amazing Top 10 and Life’s Biggest Questions, which catapulted her into the spotlight.

She worked as an events coordinator, journalist, press officer, content writer, and marketing executive before that. Rebecca has also worked as the editor-in-chief of OfficialTheatre.com and as a broadcaster for the Shoreditch Radio show (2013-15). (2012-15). Rebecca Felgate was the news media host and writer at Landon Production for four years till 2019. She was the co-founder of TheatreBloggers.co.uk (2015-17).

Rebecca Felgate’s net worth is unknown.

The English blogger, YouTuber, and social media sensation is predicted to have a net worth of $500,000 as of 2021. Rebecca has enriched her firm roots in YouTube vlogging, blog writing, and as a social media influencer since she rose to stardom in 2015.

Her Instagram account (@missrebeccaj) has over 117 thousand followers, and her Twitter account (@rebeccafelgate) has 15.4 thousand. She works as a freelance social media consultant for other firms in addition to her own company. Rebecca appears to be pushing drinks such as High Park Brewery, Writers’ Tears Irish Whiskey, Wine Rack, El Dorado Demerara Rums, and others on her Instagram.

Do you know if Rebecca Felgate is married or dating?

The majority of Felgate’s social media activities are on her cuisine blogs or consulting work for other brands. She did, however, find time to pursue her passion for travel. Rebecca has a nice dating life, despite her busy schedule preventing her from regularly updating her relationship status.

Rebecca Felgate is currently in a relationship with Danny Burke, her boyfriend. Danny’s Instagram handle is @ burkishdelight_, and he has 64.9K followers. However, he has set his account to private.

They met while working at Landon Production, according to Rebecca’s Instagram post from March 12, 2019, and had been dating for three and a half years at the time. It appears that the couple met in late 2015 and became boyfriend-girlfriend. Despite the passage of time, the couple has yet to announce an engagement or discuss marriage.

Her partner is said to call her hooterface. She had a romantic relationship with English singer, musician, and composer Matt Bellamy, according to sources. According to sources, she wants to become a vegan, but she loses track of time and ends up eating cheese and occasionally meat on weekends. She also enjoyed performing interpretative dances with her close pals.