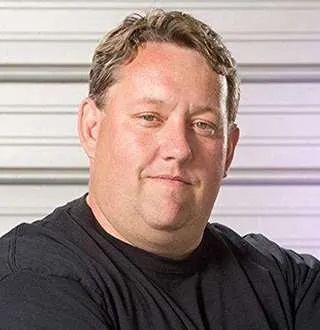 Rene Nezhoda and his long-time wife, Casey Nezhoda, are back for the 13th season of the A&E Network reality show Storage Wars. The new season will debut on April 20, 2021.
On March 27, 2021, the professional buyer announced the show’s renewal via an Instagram post.
The final episode of the 12th season aired on January 30, 2019, and there has been no word on the show’s renewal since then.

In the fourth season of Storage Wars, Rene Nezhoda  joined the cast.

In 2013, Nezhoda joined the fourth season of Storage Wars. He gained international acclaim and became the primary buyer beginning with the fifth season. From the beginning, he collaborated with his wife, Casey Nezhoda.
As a power couple, the husband and wife team tries to secure profitable storage lockers and land lucrative auction deals.
They run their business out of their California thrift store, Bargain Hunters Thrift Store. The 7000-square-foot store was located at 12845 Poway Road in Poway, but they relocated after their shop had to be demolished to make way for apartments.

His passion aided him in increasing his net worth.

He pursued his passion and made it his profession. With his thrift store experience, he even published a price guide on Limited Edition Casino Chips.
That isn’t all. On October 3, 2013, the reality star also launched a YouTube channel named after his store. He shows his daily life with his family and the Bargain Hunters Thrift Store, all the details that aren’t shown in Storage Wars.

The thrift-store owner has a net worth of $1.5 million, according to Celebrity Net Worth.

Parents of a Daughter and a Wife

Nezhoda has been married to his co-conspirator, Casey Nezhoda (45), for more than 15 years. On January 1, 2006, the couple tied the knot.
Tatianna Nezhoda, their 14-year-old daughter, is the result of their relationship. On November 1, 2006, she was born.

Rene Nezhoda was born in Austria on April 5, 1977, to Gunter Nezhoda. His parents were antique dealers in Austria who raised him in Frankfurt, Germany, until 1990.
When he was 11 years old, the Nezhoda family moved to the United States and settled in San Diego.

He finished his high school education at Las Vegas High School. Because of his German ancestry, the television star has American nationality and speaks with a German accent.