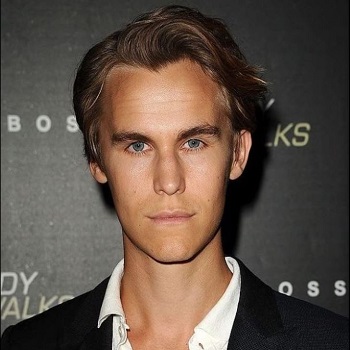 Rhys Wakefield is an Australian actor, director, and producer who rose to prominence after playing Lucas Holden in the TV soap opera Home and Away (2005- 08). Wakefield also made notable television appearances in True Detective (2019) and Reprisal (2019). (2019).

Since 2000, the Queensland native has been working professionally, and his first film, The Black Balloon, received an AACTA Award nomination (2008). He has appeared in a number of commercially successful and critically acclaimed films, including Sanctum (2011), The Purge (2013), After the Dark (2013), and +1. (2013).

What Is Rhys Wakefield’s Age and Height As A Graduate Of McDonald College?

Wakefield was born in Cairns, Queensland, Australia, on November 20, 1988. His father is a navy veteran, and his mother is a medical standards officer. Rhys had a strong interest in acting since he was a child, so he enrolled at McDonald College of Performing Arts, where he won an acting scholarship in 2003 and graduated in 2006.

Rhys had many theatrical credits while at McDonald College, including roles with Opera Australia and the Australian Ballet, as well as appearances in numerous Shakespeare festivals. Wakefield made his on-screen debut in 2000 with Bootmen but was uncredited for the role, so his guest appearance in Don’t Blame the Koalas (2002) was credited as his first TV role.

The Australian actor rose to prominence in 2005 as Lucas Holden, a series regular on the TV soap opera Home and Away, where he worked until 2008 (363 episodes) alongside Ray Meagher, Lynne McGranger, Emily Symons, Ada Nicodemou, and Shane Withington.

After that, until the late 2010s, Wakefield primarily focused on his big-screen projects.

He made his comeback to television in 2019 as Freddy Burns in True Detective and Matty in Reprisal, sharing the screen with Mahershala Ali, Carmen Ejogo, Abigail Spencer, and Rodrigo Santoro.

Worked on films that were both commercially successful and critically acclaimed

Rhys Wakefield made his feature film debut in 2008 with Luke Ford, Toni Collette, Erik Thomson, and Gemma Ward in The Black Balloon. It earned him an AACTA Award nomination for Best Actor in a Leading Role.

In 2011, he starred alongside Richard Roxburgh, Dan Wyllie, and Ioan Gruffudd in the commercially successful 3D action-thriller Sanctum. The film, which cost $30 million to make, grossed 108.6 million dollars at the box office.

Following a minor role in Nobody Walks (2012), the actor was cast as Polite Leader alongside Ethan Hawke, Lena Headey, Adelaide Kane, and Max Burkholder in The Purge (2013). The dystopian action-horror film grossed $89.3 million, far exceeding its $3 million budget.

In addition, Rhys appeared in two critically acclaimed films in 2013, After the Dark, co-starring James D’Arcy and Sophie Lowe, and +1, co-starring Ashley Hinshaw and Natalie Hall.

Wakefield is also a producer and director

Aside from acting, Rhys isn’t afraid to show off his work in front of the camera, particularly as a director. In 2019, he directed and produced Berserk, his first feature film. He served as executive producer and director in six episodes of the TV series From Now (2020-21), in addition to starring as Agent Ross.

Rhys Wakefield’s net worth is unknown.
Rhys has amassed a substantial fortune as well as widespread fame as an actor who has worked in the industry for more than two decades. With his early TV success on Home and Away, the Australian actor is now among the millionaires; his acting career is, without a doubt, his primary source of income.

Rhys Wakefield has a net worth of $3 million as of early 2021, according to Celebrity Net Worth.

In addition to his TV roles in True Detective and Reprisal, the Australian actor has appeared in a number of critically acclaimed films, including Sanctum, The Purge, After the Dark, and +1. Furthermore, his directing and producing credits add up to a sizable sum on his resume.

Despite the fact that Rhys’ professional resume is devoid of secrets, the actor has kept his personal life, particularly his relationships, under wraps. Wakefield was rumored to be dating Indiana Evans, his Home and Away co-star, in 2006. Their secret relationship was made public in mid-2006, but they broke up by November of that year.

Despite their breakup, the two remain close friends. The Purge actor has had a number of on-screen pairings over the years, including Gemma Ward in The Black Balloon (2008), Anna Enger Ritch in Endless Love (2014), and Jessica Tovey and Jessica McNamee in Home and Away. But neither of them had a date.

In early 2021, his official Instagram account @rhys wakefield had over 13.7K followers, but he has not posted or hinted at his dating life. He isn’t married, according to reports. Wakefield is currently single, according to some sources.

1) What is Rhys Wakefield’s age?

2) What is Wakefield’s height?

3) In ‘The Purge,’ who plays the Polite Leader?

In the 2013 horror film ‘The Purge,’ Rhys Wakefield played the role of Polite Leader.

4) Was Rhys Wakefield in “True Detective”?

5) How many episodes did Rhys Wakefield appear in on ‘Home and Away?

Answer: Wakefield rose to prominence on television as Lucas Holden, a regular cast member of Home and Away from 2005 to 2008, in which he appeared in 363 episodes.