Due to his parents’ divorce, world-renowned Robert Oberst did not enjoy a joyful upbringing. So, if it means spending more time with his wife and son, he is willing to terminate his career in a hurry. 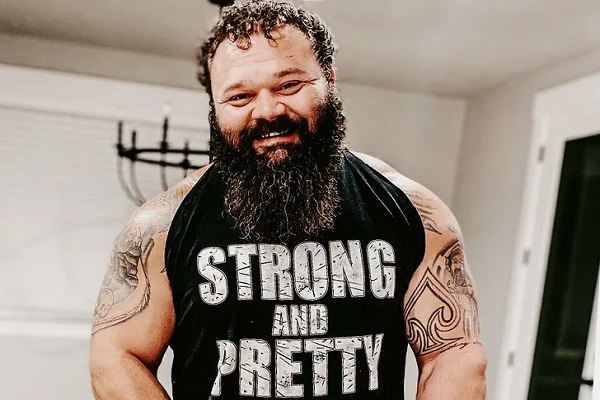 Underneath the tough exterior of American log lifting record holder Robert Oberst lurks a kindred spirit who values family above all else. Even weightlifting isn’t an option.

The birth of his son, Atlas, as the strongman so eloquently puts it, “changed everything for the better.” While Robert grew up in a troubled environment with little parental direction, the hero of The Strongest Man In History does not want Atlas to suffer the same fate. In fact, the 36-year-old is so committed to it that he is willing to give up his pro-strongman career in order to spend more time with his family.

So, without further ado, let’s go into Oberst’s past and personal life in order to learn more about the man behind the Hulk.

Since 2017, Robert Oberst has been in a relationship

For the past three years, the Santa Cruz native has been dating Meghan Nesgoda, a sales assistant at Independence Indoor Shooting. They initially met on July 1, 2017, at a Strongman competition. They subsequently began their relationship after a few more meetings.

The affection between Robert and his lovely sidekick, Meghan, can be seen on their social media accounts, where they routinely post images of the two of them together.

For example, on July 1, 2020, in their third year of marriage, Meghan posted on Instagram the very first photo they ever shot together, in which they can both be seen laughing while Meghan sits on the weightlifter’s able shoulders. The charming partner had some nice things to say about their relationship as well:

“Met this guy three years ago today, and it’s been a wild ride ever since ðŸ˜‰”

Robert is the father of a son from a previous marriage

Prior to his relationship with Meghan Nesgoda, the World’s Strongest Man yearly competitor was married to Kristin Oberst. In 2012, the two exchanged wedding vows in Hanford, California.

The newlywed couple appeared to be inseparable after their wedding, with Kristin accompanying her brilliant husband to competitions. Furthermore, whenever Robert gave victory speeches or gave interviews, he constantly mentioned his wife Kristin as a main support system, without whom he would not have been able to achieve any of his successes.

Furthermore, in 2013, the pro-strongman created a fundrazr.com page so that Kristin may accompany him to China for the Worlds Strongest Man competition. On September 9, 2016, the couple welcomed their first child, a son called Atlas Bear Oberst, into the world, bringing even more joy to their relationship.

However, the couple almost vanished from the public eye until late 2016, and they haven’t been seen together since.

According to Robert’s current sidekick, Meghan, it appears that he and Kristin are no longer together. However, none of them has made any public statements regarding their divorce, including when and why they divorced.

For his son, Robert aspires to be the best version of himself

Despite the fact that Robert and Kristin are no longer together, the Worlds Strongest Man finalist does not want his son to suffer the consequences of their failed relationship.

When he was only 16, the strongman had to deal with his parents’ divorce, his father, former military officer Jim Oberst, and his mother, Kathy Oberst.

The pro-athlete claims the event left him homeless while speaking with London Real about it. While the Western Oregon University graduate did not go into much detail, he did say that his divorce left him with a gruff and unpleasant personality. Despite the fact that the 36-year-old refuses to elaborate, it is apparent that he recognized the importance of familial ties from an early age.

This is why the bearded hunk desires to spend as much time as possible with little Atlas and lavish him with affection. The father of one wants to leave no stone unturned, therefore he is willing to go the extra mile. For example, on September 9, 2019, he celebrated Atlas’s fourth birthday in front of ten thousand people and shared the footage on Instagram.

Similarly, during a sit-down interview with London Real on September 29, 2019, the world-renowned athlete discussed how his son inspires him to be the best version of himself. In the same interview, Robert stated that he would gladly give up his professional job in order to spend more time with his pet Atlas.

With this in mind, the strongman aspires to be a good father to Atlas, a loving partner to Meghan, and an all-around kind guy who spreads happiness.

Is Jeremy Wade Married? – Insights on His Love Life, Net Worth and Career

Deon Cole, an American actor, and comedian lived life on his own terms. With gay rumors swirling about him, he issued a firm response declaring his sexuality. Furthermore, he adopted a son, which
Read More
February 23, 20220

Magnus Carlsen’s Girlfriend: Who Is She? Learn about his biography, love life, and net worth

Magnus Carlsen, the Grandmaster of Norwegian Chess, is now dating. Also learn about his biographical information, such as his net worth, parents, age, IQ, and chess games.Quick InformationDa
Read More