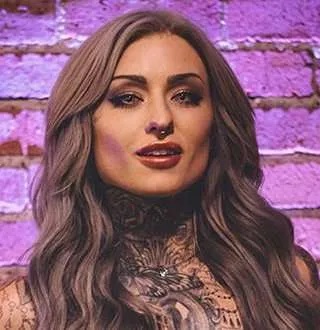 What surprised me was how quickly she had honed her skills. She  engaged into tattoos after spending half her life designing clothes. Her natural abilities to imagine, design, and implement her ideas appear to have aided her in achieving the title of ink master.

Malarkey’s flawless jewelry tattoos undeniably reflect her creative side as well as her conscientious approach. Her talent for such art, on the other hand, arose from her years of experience as a fashion designer. Before making a name for himself in the tattoo industry, the tattoo artist worked as a fashion designer. She graduated from the Fashion Institute of Technology in 2007 as the Critics Choice Award winner of her class, having been born on June 17, 1987. She worked as an in-house fashion designer for a private label clothing company in New York City, designing dresses for retailers such as Chico’s and Boscov’s.
However, she left the fashion industry in 2011 and began working full-time in the tattoo industry.

After quitting fashion design, the professional tattoo artist returned to her hometown of Pennsylvania. She became interested in tattooing and began an apprenticeship in a private tattoo parlor. She developed her distinct style in black and gray tattoos after a year of practice. Austina Obscure, a friend (tattoo artist) who knew her during her development phase, praised her eye for details and told the Timesleader that she knew Malarkey “would be great.” Malarkey’s appearance on the show brought her to the attention of the public as a professional tattoo artist. Her fame grew even more when she became the first female winner of Ink Master in 2016. She was even crowned “Tattoo Queen.”

Won Ink Master with an Opposed Tattoo Her fashion sense

Malarkey’s distinctive style, characterized by her black and gray tattoos inspired by jewelry, fashion, and antique themes. She is a prolific creator of intricate and three-dimensional details, but she rarely creates vibrant tattoos. However, in the season 8 finale of Ink Master, her competitor, Kelly Doty, challenged her to create a 90s’ news school-themed tattoo. Accepting the challenge, Malarkey stepped outside of her comfort zone to create a skull tattoo with vibrant color play.

The 33-year-old nailed the challenge in a way that impressed the judges while also demonstrating her ability to handle any style if necessary. With only five years of tattooing experience, she won against fellow artists Gian Karle Cruz and Kelly Doty that season.