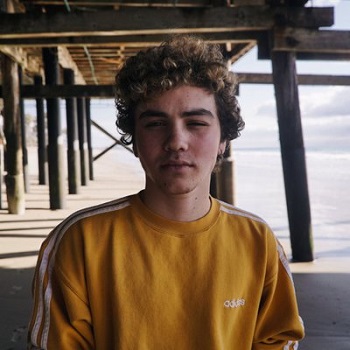 Samuel John Pottorff is an American YouTuber who rose to prominence after joining the online star group Our2ndLife in 2009, alongside Kian Lawley, JC Caylen, Ricky Dillon, Connor Franta, and Trevor Moran. After his team disbanded to pursue their own careers, Sam started his own YouTube channel, which currently has 626.88k subscribers.

Sam Pottorff was born on October 19, 1995, in Laguna Beach, California, under the sign of Libra. People born under this zodiac sign have a tranquil, fair demeanor and despise being alone.

He is of mixed Turkish, Palestinian, and Arab heritage and possesses an American passport. His parents’ identities are kept a secret.

Sam grew up in California with his two older sisters, Mia and Cole Pottorff, as well as his little brother, Levi Pottorff. Sam and his younger brother Levi went to Dana Point’s Opportunities For Learning, which is a private study school. Sam, on the other hand, dropped out of school to focus on his career.

The Career of Sam Pottorff

When he was in high school, he started his YouTube career alongside his friend Kian Lawley. With the channel ‘our2ndlife,’ which Sam co-created with Kian Lawley, Trevor Moran, JC Caylen, Connor Franta, and Rick Dillon, he was launched into the spotlight.

They used to upload a variety of videos, ranging from personal facts to do-it-yourself experiments that went horribly wrong. Their YouTube channel was extremely successful, with about 2.9 million subscribers. They split up in December 2014 to pursue their separate professions.

What Did Sam Pottorff Do When His YouTube Group Split Up?

Sam began working on his own YouTube channel when his band disbanded, vlogging with regular tweets and Instagram updates. On May 11, 2014, he started a YouTube channel called ‘Pottorff.’

He has roughly 641k subscribers on his channel, with 21,737,786 views as of January 2019. His videos are authentic and highly relatable, which is why he has so many fans. In April 2015, he included model Yovanna Ventura in his YouTube video Truth or Dare.

Sam updates his videos twice a week and is active on social media platforms such as Twitter, Instagram, and Snapchat. On January 2, 2015, Sam released his own song, “When She Calls (feat. Golden),” which he co-wrote with Golden.

It is the first single Sam Pottorff has ever released, as evidenced in the video below. ‘When She Calls (feat. Golden)’ is the title of his track.

The net worth of Sam Pottorff is believed to be $500,000. He has amassed a sizable wealth as a result of his profession. He originally joined YouTube in 2009, where he co-founded Our2ndLife! channel. Together with his pals. It was a hit, but they split up to pursue separate careers. In 2014, he started his own YouTube channel. In 2015, he even released his own song.

He brought a Double Charger automobile to the show in 2014, which ranged in price from roughly $16,900 for the base model to around $31,000 for the performance-oriented Charger SRT-8. Sam also has a sizable fan base on Instagram, with more than 1.4 million followers. It’s also one of Sam’s main sources of income, as a promotional position pays anywhere from $2,892 to $4,821.

The YouTuber, according to sources, has a home in Los Angeles.

Sam Pottorff is currently single. He was previously married to Rosa Van Iterson, his longtime girlfriend. Rosa is a YouTube personality, actress, writer, and producer who is best known for her YouTube channel Sam & Rosa.

On September 7, 2016, Rosa and Sam got engaged. They published the video to their channel after their engagement, and it soon went viral. They married in March 2017 after a year of dating.

Their wedding was intimate, with only their immediate family and a few close friends in attendance. Unfortunately, the couple filed for divorce in December 2018 citing irreconcilable differences.