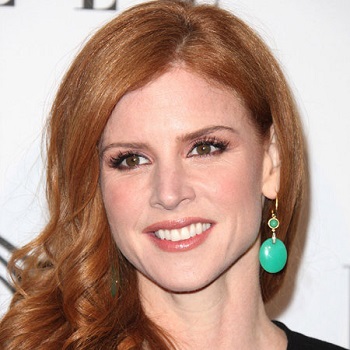 Sarah Rafferty is an American television and film actress best known for her role as Donna Roberta Paulsen in the USA Network’s TV series Suits. Rafferty has been in a number of films and television shows, earning her a large following.

Rafferty is a married woman with two children. She married Aleksanteri Olli-Pekka ‘Santtu’ Seppälä and they had two daughters together.

Sarah Gray Rafferty was born on December 6, 1972, in Connecticut, United States of America, under the zodiac sign of Sagittarius. Rafferty is of White ancestry and is of American nationality.

She was the youngest of four children born to an artist father Michael Griffin Rafferty Jr., who also had an oil business, and a mother Mary Lee Rafferty, who was the chairwoman of the English Department at the Convent of the Sacred Heart School. Her parents reared her in a Catholic home with her three sisters, Connie Rafferty, Maura Rafferty, and Ann Rafferty. Her eldest sister, Maura, is a talented painter, and one of her sisters, Ann, is a screenwriter and TV film director.

She was always interested in performing as a child, and she used to make caricatures of her family members. She began taking private acting and dancing classes as she grew older. She was able to express herself in front of a large crowd after enrolling at her first school, Phillips Academy in Massachusetts. She was an active member of her school’s drama team and appeared in numerous theatrical productions during her school years. She graduated from there in 1989 as a good student and went on to have a prosperous life.

Rafferty attended Hamilton College, where she majored in theater and English. She also attended the University of Oxford for her junior year and after graduating from Hamilton College in 1993. She enrolled at the University of Oxford after moving to the United Kingdom to pursue her studies. She went on to Yale School of Drama to receive a master’s degree in fine arts.

She believes that practicing acting from a young age enhanced her confidence and helped to shape her profession.

Sarah Rafferty made her Hollywood debut as Sarah in the television film Trinity in 1998. Rafferty later played in a minor role in a number of TV episodes and series, including Law & Order, Third Watch, The District, Six Feet Under, and Pepper Dennis, to name a few.

In 2007, Rafferty starred alongside Gabrielle Union, Brian J. White, and Lucy Lawless in ABC’s TV pilot Football Wives as Belly Cooper. In the same year, she starred alongside Lacey Chabert, Gena Rowlands, and Sam Trammell in another TV film, What If God Were the Sun?

She has been playing Donna Paulsen, a legal secretary, in the legal drama TV series Suits since 2011, with Meghan Markle, Patrick J. Adams, and Gabriel Macht. His performance has been praised by both fans and reviewers alike.

Rafferty made her film debut as Amy in Mambo Cafe in 2000. She starred as a nurse in Brendan Murphy’s film Speakeasy two years later.

Socer Dog: European Cup, Falling for Grace, and Four Single Fathers are just a few of her other films. Her film The Devil Wears Prada, which was released in 2006, grossed $326.5 million at the box office.

Sarah Rafferty’s net worth is unknown.

Sarah Rafferty’s net worth is believed to be $5 million. From her role on the TV show Suits, Rafferty earns a remuneration of $25k every episode. Her films and television shows have earned her a sizable fortune.

Rafferty owns a $49k Mercedes GLK350. She is able to keep her opulent lifestyle thanks to her high earnings.

Sarah Rafferty is a married woman with two children. Rafferty married Aleksanteri Olli-Pekka ‘Santtu’ Seppälä, her boyfriend became husband, whom she dated at Yale University. Santtu, a former art student, went on to work as a market analyst.

The pair married on June 23, 2001, after a 15-year romance, in a ceremony at the Roman Catholic Church of St. Mary in Greenwich, which was attended by friends and family. They have two daughters, Oona Seppala (born in October 2007) and Iris Seppala (January 2012). She is happily married to her husband and has two children.