Scott Adams and his wife Kristina Basham have retaliated against critics.

The hate remarks were “entertaining” to Scott Adams and Kristina Basham. 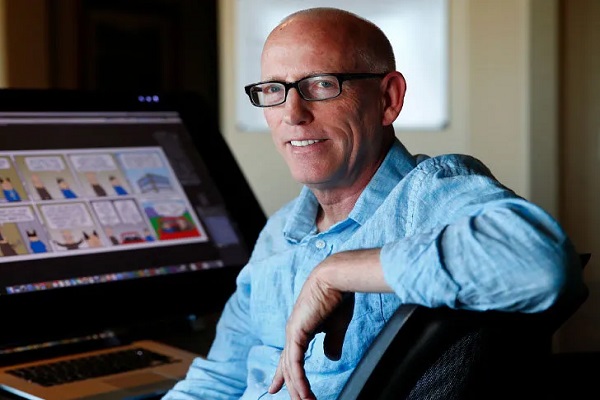 Due to their age gap, the 63-year-old bridegroom and 32-year-old bride attracted a slew of trolls and derogatory remarks at the ceremony. With the support of his wife, Adams did not hold back in responding to the detractors.

They Were Trooped Because of Their Age Disparity

In 2016, Adams and his wife, pilot and instrumentalist Kristina Basham, began dating. People have been making disparaging remarks about them since they began dating due of their age gap.

A Twitterati voiced his thoughts about Adams and Basham’s relationship on July 12, 2018. He wrote that Adams was astute and recognized that the former model was just with him for the money; yet, he allowed her to stay with him because he desired a young lady in his life.

On July 8, 2018, when Adams shared a lovely photo of his now-wife on Twitter, another Twitter user insulted them, adding, “your granddaughter?”

These are just a few examples of the couple receiving frightening and hurtful remarks.

They Retaliated Against the Hate Comments

Adams and Basham married on July 11, 2020, after four years of dating.

And just a few days after the wedding, the couple retaliated against the negative remarks made about their marriage and love.

Initially, the comic creator responded to the haters on Twitter. He sarcastically complimented the “bitter and broken people” who said unpleasant things about his wedding on July 14, 2020. He further mentioned that he and his wife found the rude remarks amusing.

“Thank you to all the bitter and broken people who had unkind things to say about my wedding. We found it entertaining that so many professional writers could only think of one joke-insult . . . and it was the same one. “

Scott’s pilot wife responded to her husband’s post on July 15, 2020, by addressing angry comments about Scott’s wedding gown. She mentioned that he wanted to wear a jacket and tie, but that it was too hot for him to do so.

She also went into detail about their age difference at the conclusion. “I’m over 30,” she wrote. The age difference is unimportant. “I’m a mature WOMAN.”

“BTW Scott was going to wear a jacket and tie. I told him please don’t. It was 100 degrees out. Also, the wedding was in my backyard with only my parents, my grandparents and my siblings, because that’s what I wanted. Lastly, im over 30. Age gap is irrelevant. I’m a grown WOMAN. https://t.co/qVM1VSAzck — Kristina Basham (@kristina_basham) July 15, 2020 “

Adams was formerly married to Shelly Miles. In July 2006, the former couple wedded on a yacht in San Francisco Bay.
Adams, who was 49 at the time, married for the first time. It was, however, Shelly’s second pregnancy, as she was 39 years old at the time and had two children: a six-year-old boy and an eight-year-old daughter. In 2014, the couple divorced.
Similarly, Basham was married to Chad Basham at the time. They have two daughters with whom they share parental responsibilities.

Related Posts of Scott Adams and his wife Kristina Basham have retaliated against critics.