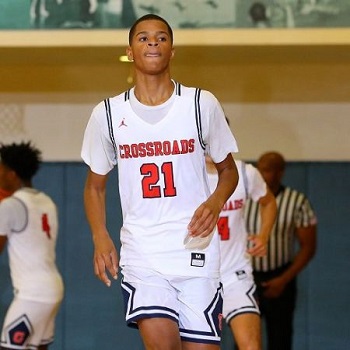 Shaqir Rashaun O’Neal is a celebrity youngster from the United States who plays basketball. Shaqir, a point guard for his high school basketball team, has received national notice. He is best known for being the son of Shaquille O’Neal, a former NBA player, and Shaunie O’Neal, a well-known TV personality.

Shaqir O’Neal was born in the United States of America on April 19, 2003. He has five siblings and is the son of retired NBA player Shaquille O’Neal and renowned TV personality Shaunie O’Neal.

Taahirah, Amirah, and Me’ara are Shaqir’s three sisters, and Myles and Shareef are his two elder brothers. His parents divorced in 2009 after separating in 2007.

He is 17 years old and attends Crossroads School in Santa Monica as of 2021. Shaqir O’Neal is a 6-foot-5-inch basketball player who is continuously growing.

Shaqir O’Neal: Who Is He?

He is one of the team’s better players. He is following in his father’s footsteps and plays a significant role in his professional development. His diet is also arranged by his father, and he adheres to it religiously.

Shaqir also starred in his mother’s reality show, ‘Shaunie’s Home Court,’ which aired on VH1 in 2016 and was produced by Shaunie O’Neal. He’s also an Instagram sensation with 922k followers.

Shaqir O’Neal has long arms, terrific vision, and good speed. He’s also a good finisher. He can shoot three-pointers in transition and off the dribble at the age of 17, which is exceedingly rare. He has led his team to numerous victories, including one in November 2018 against Ribet Academy.

What Is Shaqir O’Neal’s Net Worth?

Shaqir is the family’s youngest kid, and he is still too young to work. He has, however, competed in numerous tournaments and won numerous monetary awards. He is currently concentrating on his schooling and basketball career.

Until then, Shaqir has been able to enjoy his life as a teenager while sharing his father’s $400 million fortune. His mother’s fortune is estimated to be worth $35 million.

Is He Dating Or Is He Single?

Shaqir’s relationship status hasn’t been published as of 2021, and there’s no information on his previous partnerships, so it’s unclear whether he’s single or dating someone right now. His Instagram feed also demonstrates his dedication to his basketball profession. He’s also too young to be in a meaningful relationship.