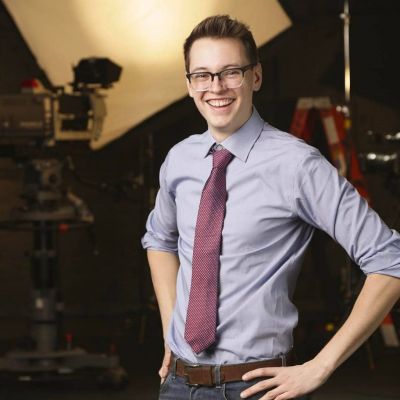 Do you know Who is Steven Suptic?

Steven Suptic is a well-known Internet celebrity, YouTuber, content developer, and podcast host. He is probably best known to the general public as one of the creators of the “Sugar Pine 7” entertainment YouTube channel and creative enterprise. He recently left all of his former endeavors, including his YouTube account “Rooster Teeth.” Let’s learn more about his future career aspirations, current relationship status, net worth, and so on.

Steven has naturally straight dark brown hair that he keeps short; he has brown eyes and wears glasses because he has bad myopia. He stands 6ft 2ins (1.88m) tall and weighs approximately 154lbs (70kgs). He enjoys casual apparel and frequently wears his favorite caps, T-shirts, trousers, and shorts.

Steven Suptic was born on February 6, 1993, in Illinois, USA, under the sign of Aquarius, and is an American citizen. Almost nothing is known about Steven’s personal life, as he prefers to keep any data about his family members confidential. Even though his father used to participate in some of Steven’s films, no one knows his name or employment, and no one knows anything about Steven’s mother – he’s just never spoken anything about them.

Steven graduated from high school in 2011. Nothing is known regarding his subsequent education; he has never identified any colleges or universities from which he attended or graduated. However, it is known that Steven has always enjoyed playing video games and has a strong desire to share his expertise and experience, which is why he began making videos while still in high school.

Steven started his first YouTube channel, “MlgHwnT,” in January 2011 and began to upload “Let’s Play” videos on games such as Halo and Minecraft; his friend Vince Demise assisted him with editing. Steven’s channel quickly gained popularity because there were few gaming YouTubers at the time. He has expanded his fanbase by working well with YouTube personalities such as MunchingBrotato, SkyDoesMinecraft, and AviatorGaming. Steven rose to prominence as one of the most popular YouTubers specializing in gaming videos in 2014.

He subsequently started another channel called “HWNTwo” to push the boundaries of Minecraft videos. In February 2015, he relocated to California, and in March 2015, he joined Discovery Digital Networks’ “Super Panic Frenzy” project, which focuses on gaming videos in Japanese and English. Steven also collaborated with long-time collaborator Reina Scully on another project named “SourceFed,” which was overseen by Philip DeFranco. Steven was a significant personality in the world of YouTube vlogging when “Super Panic Frenzy” was closed on August 9, 2016. He was working on two very successful cartoon shows at the time, “Wild Adventures” and “To Kill a YouTuber.”

Steven and two of his buddies, Clayton “Cib” James and James DeAngelis, launched the “Sugar Pine 7” YouTube channel in 2017. They made many programs about it, including “Alternative Lifestyle,” “The Steven Suptic Experience,” and “Behind the Pines Podcast,” with actors and actresses such as Autumn Farrell, Jeremy Sauder, Sami Jo Siedband, and Parker “ParkerGames” Coppins. The channel stopped generating new episodes of the series in 2018, and the only thing left on the channel is “Behind the Pines Podcast,” with a new episode released once a week. Steven subsequently relocated his project “The Steven Suptic Experience” to the “Rooster Teeth” YouTube channel and entertainment firm. Steven left the company in early 2019 and is now working on his projects, which he is keeping under wraps for the time being.

According to reliable sources, Steven Suptic’s net worth is around $400,000. He’s made this sum of money by constantly working as a vlogger, podcast host, and YouTube video developer. He also owns a Porsche, which can cost up to $200,000 depending on the options. Even though his project “Sugar Pine 7” is no longer active. His YouTube channel still earns him and his team roughly $1,500 every month. Steven’s net worth will only increase in the future as he works on his next initiatives.

Suptic dated another YouTuber, Natalie “TheZombiUnicorn” Casanova, before meeting his fiancée, but their relationship didn’t last long, and the couple split up.

Steven met Alyssa Terry at the beginning of 2015; they clicked right away since they shared many interests and plans for their future lives and jobs, particularly in social media. They were engaged on February 16, 2017, but have yet to marry. Alyssa got the opportunity to work alongside seasoned YouTube actors like Clayton James, James DeAngelis, and Clyne Brisson. Neither Steven nor Reina, however, ever confirmed the reports.

Steven and his fiancée share their home with two dogs, Littlefoot and Winnie. Steven enjoys traveling and eating out, and his favorite food is hamburgers.

He was in an automobile accident in 2017. A four-car catastrophe, and his car was in the center of the road. Steven, on the other hand, escaped with only a minor scratch. However, it is yet unknown what injuries the other drivers had if any.

Steven has no choice but to remain active on multiple social media sites as an Internet personality. However, he canceled his Instagram account at the start of 2019. (though his profile there had a verified badge). His admirers were perplexed by his decision. Even though several of them remembered Steven giving bad feedback about the application. Stating that he didn’t like it and would not use it in the future. One of his followers made a false account with the same name – “Steven Suptic” – with nearly 5,000 subscribers. But only 11 postings, none of which are about the real Steven Suptic. Nonetheless, Steven did not abandon his Twitter account, where he has around 300,000 followers and updates daily.

He also entertains himself (as well as his fans and viewers) with his regular Twitch streams. Steven frequently goes live with his Fortnite streaming and has over 16,000 followers. Due to the privacy settings, Steven put on his Facebook profile. His profile is hidden from search, so only his friends may see it. Though the “Sugar Pine 7” channel is no longer active and only weekly podcasts are broadcast. The station’s official Instagram profile still has around 20,000 followers. The fans keep going to the commentaries to thank the team for everything they’ve done over the years in “Sugar Pine 7.”