Tabatha Coffey’s Partner and Bond; The Real Reason She Won’t Marry Her Girlfriend 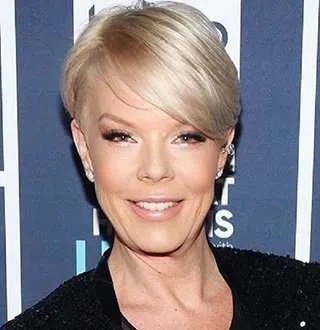 Tabatha Coffey, an Australian hairstylist. She has never hidden her sexuality or the fact that she has been in a long-term relationship with her girlfriend. But, even after 20 years of courtship, what is stopping her from marrying her girlfriend? she is best known for her appearances on Shear Genius and her own show, Tabatha Takes Over. She is also a feminist and a motivational speaker. Her TED Talks video, in which she discussed how to be a successful businesswoman, has been viewed over a million times on YouTube.  Coffey entered into a partnership with the St. Baldrick’s Foundation in 2011, which raises funds for pediatric cancer research.

Tabatha Coffey Adopts a Decisive Mindset in the Hair Salon Business Tabatha Coffey was born on May 17, 1969, in a family where her mother (who died of cancer in 2011) and brother were both hairstylists. She began her career as an assistant in a local shop at the age of 14 because hairstyling was in her blood. Coffey  enrolled in a four-year apprenticeship program to learn more about hair styling, which led to her three-year training in London. Her skills led her to tour countries 6-12 times a year doing hair shows after opening her own salon, Industrie Hair Gurus in Ridgewood.

She first gained international attention in 2007.  She appeared on the reality television series Shear Genius, where she was known for her blunt and direct approach with the other contestants. This soon led to her own show, Tabatha’s Salon Takeover, in which she used her business knowledge to help salons that were about to close. As in 2018, the hairstylist, 49, appears in Bravo’s Relative Success with Tabatha, which employs a similar concept to Tabatha’s Salon Takeover. Tabatha has amassed a sizable fortune through her career and expanding business, with an estimated net worth of $6 million.

In relation to the dying business of many hair salons, which occurs for a variety of reasons, Tabatha shared some excellent points to encourage people to begin investing in their salon in order to smooth cash flow and grow their business. Her first suggestion was to replace or purchase additional chairs, shampoo bowls, and other necessary tools. Its done in order to match the brand and the environment. She went on to say that shoddy equipment hampered an excellent customer experience. Another point raised by the hair stylist was the importance of optimizing the booking strategy and the need for every salon to have a website.

This helps to distinguish oneself from competitors and highlights the person as a stylist, and they can persuade clients to book services. Offering additional products and services is one way to help the salon grow, and Tabatha expressed how people needed to learn how to invest in new products that could bring positive attention to the brand, which would automatically bring in more revenue for the salon.

Tabatha’s final piece of advice was to hire more stylists and talents because people want to see their salon run smoothly. And it is because of this that Tabatha has one of the most successful salon businesses.
Tabatha Coffey’s Long-Distance Relationship With Her Girlfriend. she has a very trusting partner by her side who supports her through pretty much everything from behind the curtains as a woman who never hid her sexuality, defining herself as openly lesbian.

Will Tabatha Coffey Ever Marry Her Long-Term Partner?

And, while she yet not revealed the identity of her girlfriend. Tabatha consist some nice things to say about her same-sex relationship. She even went so far as to admit that she married to her partner in her heart.
Will you please have some popcorn with all the cheese?  But Coffey and her girlfriend aren’t married. Tabatha believes that marriage is a big deal, regardless of whether it’s same-sex or straight marriage, so it doesn’t appear that she’ll be introducing her wife anytime soon. That isn’t important; the two have already exchanged heartfelt vows. But, given that Tabatha and her mystery wife have been together for 20 years, let’s hope she feels comfortable revealing her wife to the rest of the world if she does decide to marry her.

Related Posts of Tabatha Coffey’s Partner and Bond; The Real Reason She Won’t Marry Her Girlfriend