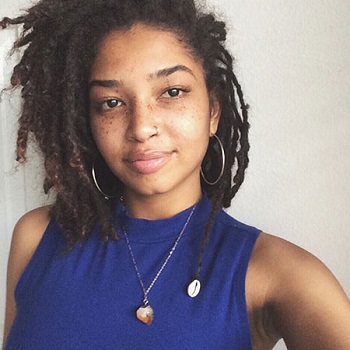 Tanita Strahan is a German visual artist who is most known as the daughter of Michael Strahan, a former NFL player and certified NFL star. She is also well-known for her beautiful watercolor, ink, and digital art pieces. She is self-employed, according to her social media page, and painting is both her love and her major employment.

Tanita Strahan was born in Germany to Michael Strahan and Wanda Hutchins in 1992. She was born under the sign of Scorpio, which characterizes her as competitive, loyal, possessive, and spiteful, among other qualities.

Her parents married in 1992, although she was only four years old when they divorced. Following his divorce, Michael married Jean Muggli. Tanita has a brother, Michael Strahan Jr., and two half-sisters, Isabella and Sophia Strahan, both of whom were born in 2004.

Her grandpa, Gene Willie Strahan, was a US Army officer who rose to the rank of Major. Louise Strahan, her grandmother, was also a basketball coach.

Her nationality is German and she is of mixed heritage. She graduated from the Fashion Institute of Design & Merchandising in Los Angeles, California, with an Associate of Arts – AA in Design and Visual Communications.

Tanita is currently self-employed as a visual artist. She is well-known for her artwork, which incorporates watercolor, ink, and digital art media. Despite being the daughter of a famous football player, Strahan has kept her career details hidden from the media.

Her father, on the other hand, is a well-known former NFL player who spent more than 15 years in the game. He began his career as a member of Texas Southern University’s football squad. From his junior year on, he was considered an NFL potential.

When he was a senior with the Texas Southern Tigers, he was named to the All-America first team. Following that, in 1993, he was drafted by the New York Giants, where he spent the rest of his career, establishing himself as one of the best players of his time before retiring in 2007.

He went on to host a few TV shows after his retirement, including Live! with Regis and Kelly and Good Morning America. After former co-host Regis Philbin left in November 2011, he joined the television profession as a co-host of Live! with Regis and Michael on September 4, 2012. On April 19, 2016, he quit the show and went to work for Good Morning America. During his stay on the show, Strahan received two Daytime Emmys for “Outstanding Talk Show Host.” In 2016, ABC confirmed Michael as the host of the $100,000 Pyramid Summer Revival, which airs on Sunday nights with Celebrity Family Feud, which is hosted by Steve Harvey, and Match Game, which is hosted by Alec Baldwin.

Tanita Strahan is a low-profile celebrity who has kept her earnings and salary hidden until now. She is predicted to have a net worth of $300,000 as of 2020. According to Payscale, the average annual salary for a visual artist is $45,577.

Her father, on the other hand, is one of the most well-known NFL players of all time, with a sizable net worth derived from both his NFL career and his work as a television host.

According to Celebrity Net Worth, Michael Strahan has a total net worth of $65 million and a salary of $17 million as of 2020. He makes money via residual payments as well as his work as a football analyst on “Fox NFL Sunday.”

Calenta Mincey is in a romantic relationship with him.

Calenta Mincey, Strahan’s lover, is currently in a romantic connection with her. It’s unclear when the couple started dating, but on October 4, 2017, Strahan made her relationship public with an Instagram post.

Michael Strahan, Sr. I’ve been married twice in my life.

Michael Strahan, her father, has been single since January 2019, however, he has previously been married twice. To begin with, he was married to Tanita’s mother, Wanda Hutchins. They tied the knot in 1992 and have two children together.

With his second wife, he has twin daughters Sophia and Isabella Strahan. In 2006, he divorced his second wife as well. He married Eddie Murphy’s ex-wife, Nicole Mitchell Murphy, three years later, and they called off their engagement five years later in 2014.