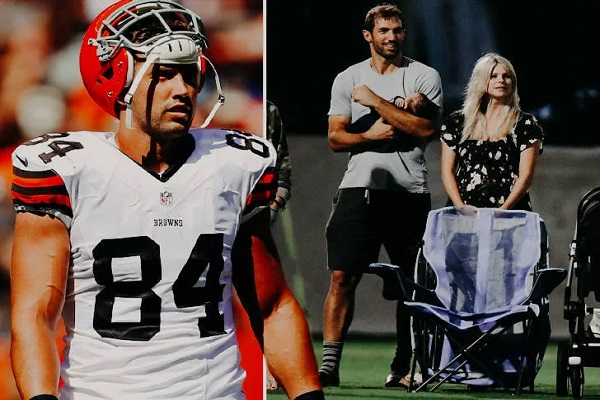 Elin Nordegren, the ex-wife of legendary golfer Tiger Woods, and NFL tight end Jordan Cameron welcomed their first child together on October 4, 2019. Aside from that, the pair is the proud parents of three children from prior marriages.

Cameron and Nordegren have four children together

Arthur Nordegren Cameron is the name given to their son by the former model and Cameron. Before they submitted the petition to alter his name in December 2019, the baby was known as Filip Nordegren Cameron.

Despite the fact that this is their first kid as a partnership, Nordegren already has two children from her former marriage to Woods: daughter Sam, 14, and son Charlie, 12. Cameron also has a 12-year-old son from a previous relationship, Tristan.

The pregnancy news went viral after Nordegren was photographed for the first time in June 2019 displaying her baby belly. She was dressed in a form-fitting black tank top, matching leggings, and a baseball cap as she stood on the sidelines with other parents cheering on her older son, Charlie, at his flag football game. The baby’s father was kept a mystery at the time, but it was later disclosed that the baby’s father was a former NFL player.

Nordegren and her nine-year-younger lover, Cameron, were then spotted together during Charlie’s soccer competition in October 2019. For the family outing, the couple also brought their newborn. The baby mama was dressed in a black maxi dress with a floral motif and white sandals. On the other hand, the handsome athlete cradled the infant while they conversed on the sidelines.

The pair had been dating for over a year before becoming parents to Arthur, according to Radar Online. In Florida, the lovebirds met through mutual friends.

Not only that, but the former Miami Dolphins player was said to have moved into Nordegren’s West Palm Beach estate. After her $100 million divorce settlement with Woods in 2010, Nordegren, 41, purchased the villa for $12.25 million.

Nordegren and Woods have reconciled their differences

From 2004 to 2010, Woods and his ex-girlfriend Nordegren were married for six years. After Woods’ infidelities were exposed in 2009, the couple parted after becoming parents to two children, Sam and Charlie.

The ex-couple, on the other hand, is now on good terms and shares custody of their two children. In a 2016 interview with Jimmy Fallon, Woods described Nordegren as one of his closest friends, with whom he discussed various topics, and she does the same.

They now communicate much more effectively, and Woods wishes they had discovered that link sooner. Furthermore, he stated that they will go to any length to ensure the happiness of their children.

“We have Sam and we have Charlie. And we love them so much that we are going to do whatever it takes to make that work,” Woods explained at the time. “[Elin has] been one of my best friends and I’ve talked to her about so many different things and she does the same thing with me back and forth. We communicate so much better now, it’s incredible. I wish we would have done that earlier on.”

Before falling in love with Cameron, Nordegren dated wealthy Chris Cline. For a long time, the couple went on and off before officially breaking up in 2014. Cline, who was 60 years old at the time, died in a tragic helicopter crash in Grand Cay in July 2019.

His mother married film director Christopher Cain when he was three years old...he stressed that he had not met the perfect wife material... The film was a lighthearted and true story about a group of
Read More
December 6, 20210

Kelly Dotty's approach to her unique tattoos, as well as the stories behind them, distinguishes her.Kelly Dotty, a finalist on the reality TV show Ink Master Season 8, has always been a fan fa
Read More