Tory Lanez had a specialist doctor work on his thinning hair.

Tory Lanez, a Canadian rapper, was mocked for his patchy bald spots. Less than two years ago, 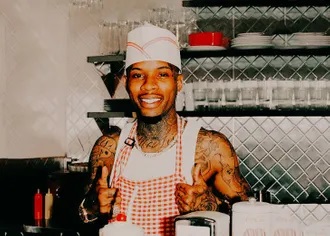 the rapper spoke out about having a hairline procedure. Recently, the Canadian rapper was spotted playing basketball. His obvious patchy bald spots, however, drew the undivided attention of netizens.
The rapper was viciously trolled on social media. “Tory Lanez hair looks like he’s been in the electric chair about to die and then the warden ran in and stopped it at the last minute,” one user joked, using the emoji for hysterical laughter. The rapper’s hair condition elicited such strong reactions from fans because Lanez discussed his hairline procedure in detail back in 2019.

Lanez discussed being too young to lose hair in a video posted on the HipHopDX YouTube channel on November 2, 2019.
“They [his doctor] do stem cell research,” he told the hosts, adding that “he specializes in Black and Latino hair.” He went on to say that his main problem was receding edges.

Evidently, the rapper was pleased with his hairline restoration and went on to reassure other men who were experiencing the same problem that it was not the end of the world. However, based on the rapper’s most recent appearance, the hairline restoration clearly did not work in the long run. His hair is a complete mess again, about two years after the procedure.
People began to make jokes about how Lanez’s hair would look in a year. One Twitter user posted a picture of a bald man with the caption, “Tory Lanez about to look like this by next year.”

Related Posts of Tory Lanez had a specialist doctor work on his thinning hair.