Tucker Carlson Tonight airs on FOX News Channel, where he analyzes and debates with the show’s guests. He would not be where he is now if his wife’s love and support had not been there for him. His wife has always supported him in all aspects of his life. Tucker and his wife, Susan, have been married for nearly 29 years and have four children together. 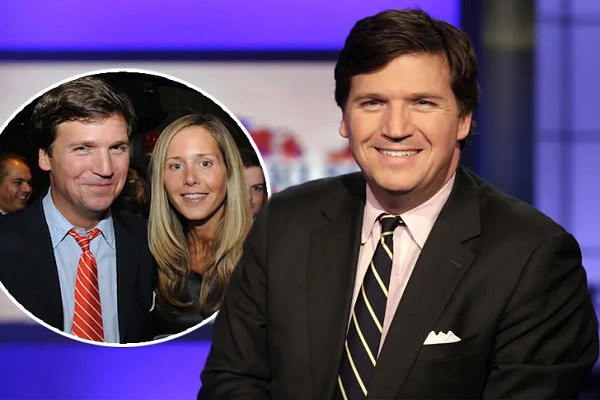 Tucker Carlson, a FOX News pundit and journalist, epitomizes the saying “Behind every successful man, there is always a hand of a woman.” Susan, his wife, has been his wife for nearly 29 years. And his wife has always backed him up in every manner possible over the years.

Tucker and Susan were sweethearts in high school

Tucker Carlson and Susan Andrews Carlson, the now-married pair, have known one other since they were teenagers. They originally met in 10th grade at St. George’s School, which they both attended.

In an interview with People on November 6, 2000, the political pundit stated that Susan was “perhaps the cutest tenth grader in the entire country.” Susan responded by stating:

“There was a bounce in his walk. He was in his khaki pants and ribbon belt and I thought, even then, he seemed so optimistic and positive.”

In 1991, only a few months before graduating from Trinity College, the primetime Fox News personality summoned the guts to ask Susan’s father for her hand in marriage. They exchanged wedding vows in August 1991.

Their marriage has lasted 29 years, and they have four children together: a son named Buckley Carlson and three girls named Dorothy, Lillie, and Hopie Carlson. The family of six is currently residing in Washington, DC.

Tucker has benefited much from Susan Andrews Carlson’s family

Tucker Carlson’s now-wife, Susan Andrews Carlson, and her father, Reverend George Andrews, have been there for him since his undergraduate days. Tucker’s wife’s father, who was also his high school principal, aided him throughout his enrollment at Trinity College in Hartford while he was struggling to finish his studies.

Later, after Tucker married Susan in the late 1990s, Susan left her teaching job so that she could properly raise her three children while Tucker continued to work.

Mrs. Carlson not only quit her career, but she also went through some difficult times with her spouse. The right-wing presenter was nearly despondent when his show, ‘Tucker,’ was terminated in 2001. Tucker felt stranded after losing his work in New Jersey, according to a NewYorker report, and as a result, the entire family relocated back to Washington. Susan, on the other hand, never gave up on Tucker and never lost faith in him.

Susan is also recognized in the same piece as improving the faith of the American conservative television host. They’re both Episcopalians, which means they’re members of the worldwide Anglican Communion.

When Tucker Carlson was six years old, his parents divorced

Tucker Carlson was born in 1969, the oldest son of Lisa McNear Carlson and Dick Carlson, the former CEO of The Corporation for Public Broadcasting and former director of the Voice of America.

Tucker’s parents divorced when he was barely six years old, which was unfortunate. In a 2017 interview with The New Yorker, he described the incident as “very strange” and said he never liked to talk about it. After a four-year separation, senior Carlson married Tucker’s stepmother, Patricia Swanson. Patricia Swanson is Gilbert Carl Swanson’s daughter and the heir/heiress of her father’s company, Swanson Enterprises.

Unlike his parents, however, the famous/infamous journalist has maintained a long and stable relationship with his partner, with whom he has been un love since they were teenagers.