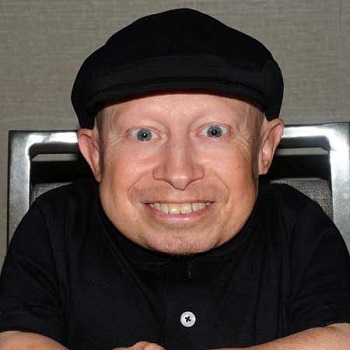 Verne Troyer, an American actor, stunt performer, and comedian, rose to prominence as one of the world’s tiniest men, standing at 2 ft 8 in (81cm), the result of a rare genetic disease known as Cartilage-hair hypoplasia. In 1994, he made his Hollywood debut in the film Baby’s Day Out and went on to star in the Austin Powers franchise as Mini-Me. His work in Harry Potter and the Sorcerer’s Stone made him famous.

Verne Troyer was born in Sturgis, Michigan on January 1, 1969, under the sign of Capricorn. In terms of nationality, Troyer was an American, and in terms of ethnicity, he was White-American. Susan (a factory worker) and Reuben Troyer were his parents (a repair technician). With his older brother, Davon, and younger sister, Deborah, he was reared by his parents.
Troyer attended Centreville High School and graduated in 1987. He was raised as an Amish boy until his parents abandoned the faith. Despite his disability, his parents never discriminated against him. He declares,

” never treated me any differently than my other siblings of similar stature. I used to be responsible for carrying wood and feeding the cows, pigs, and other farm animals.”

Verne Troyer made his Hollywood debut in 1994 with John Hughes’ family comedic adventure picture Baby’s Day Out. A stunt double for the infant character Baby Bink was supplied to him by the former president of Little People of America.

Troyer then appeared in films such as Jingle All the Way, Dunston Checks In, My Giant, and Men in Black as a stunt double. Austin Powers: The Spy Who Shagged Me, in which he played Mini-Me, was released in 1999. The film’s director, Jay Roach, was so taken by his performance that he rewrote the script, and as a result, he appeared in additional Austin Powers films.

He played Griphook in the Harry Potter and the Sorcerer’s Stone film in 2001. His most recent film was Gnome Alone, in which he played The Gnome. Troyer has also been on Celebrity Juice, Friday Night with Jonathan Ross, and Whose Line Is It Anyway?

The Personal Life of Verne Troyer

On February 22, 2004, Verne Troyer was rumored to have married model Genevieve Gallen, but the following day he filed for an annulment. The case was brought by Troyer and his lawyer, who stated that there was no legal wedding.

“There is no such thing as a valid marriage. That is why we are requesting an annulment “..

On June 25, 2008, TMZ and Shrider posted a home video of him and his girlfriend, Ranae Shrider’s sex tape, which was shot in Beverly Hills, California and Shrider’s birthplace of Fort Cobb, Oklahoma. He then sued TMZ, Blatt, and Super DVD for $20 million to prevent the footage from being distributed.

Troyer was also seeing Brittney Powell, a German-American actress, at the time.

Cartilage-hair hypoplasia is an uncommon hereditary disease that he was diagnosed with. The disease aided him in being classified among the world’s tiniest people. He was also an alcoholic. He had confessed that he was going to rehab to get help for his addiction.

Verne Troyer died on April 21, 2018, at the age of 49. He was transported to the hospital earlier this month after an emergency call said he was inebriated and suicidal. Further information about his demise has not been released to the media.