When Andrew Santino and his wife first started dating, they didn’t want to get married.

When Andrew Santino and his wife first started dating, they had no intention of marrying. They have, however, been married for over four years. 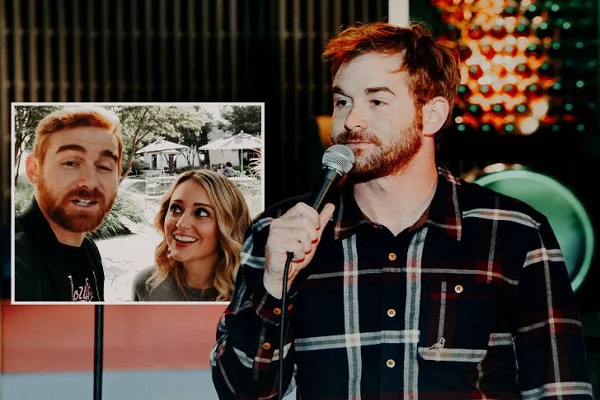 Andrew Santino, an American stand-up comedian, revealed in April 2019 that he and his wife had no plans to marry when they first started dating.

The Therapist was despised by both Santino and his wife

Santino is a happily married man who keeps his personal life hidden. Despite this, he continues to bring up her name frequently in interviews.

The stand-up comic discussed his relationship with his wife on the Good For You Podcast with Whitney Cummings, which aired in April 2019.

They began as friends and have now been married for nearly four years. He asserted that after all these years, they still enjoy a healthy relationship with no awkward silence in each other’s company.

When Cummings asked him when he knew his wife was the one for him, he stated he had a specific moment when he realized she was the one in the podcast.

Santino and his wife had no intention of getting married at first. They didn’t give a damn about starting a family and had no intentions to do so because they were both so focused on their work.

Andrew Santino and his fiancée had started going to couples’ counseling during their relationship because of some concerns. He joked that they would bond over their dislike of their therapist since they didn’t like his ‘vibe.’

One such incident, which occurred while they were in therapy, convinced him that she was the one.

He knew they’d work out after a long session in which they’d poured their hearts out. After two minutes of utter silence, the pair burst out laughing at the startling sound of employees shouting incoherently outside their window. With the sudden shift in mood, he recognized she understood his sense of humor and that she was the one.

When asked about their arguments, the comic explained that he and his wife only quarrel because of miscommunication, which is remedied when he apologizes.

He claims that the key to their relationship working out without a hitch and discussions running dry is because they are both invested in their careers and have hobbies that are different from each other.

Santino is rumored to be gay

Many people have speculated that Santino, who is most known for his part in the comedy series I’m Dying Up Here, is gay.

The comic told Rogan on his show, The Joe Rogan Experience, that his favorite online rumor about himself was that he was gay. Santino fueled the speculations by jokingly posting a photo with his pal Chris D’Elia with the comment “going away to get married.”

Santino and D’Elia have both mocked the situation since then by playing along with the supposition.

D’Elia, on the other hand, has been the subject of public attention after many women have accused him of sexual abuse. While that is a matter requiring further investigation, it established beyond a shadow of a doubt that Santino and D’Elia were not gay partners—it was all a farce.

Related Posts of When Andrew Santino and his wife first started dating, they didn’t want to get married.