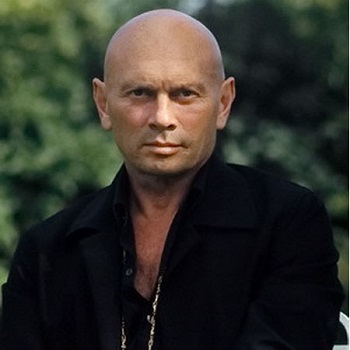 Yul Brynner was a Russian film and stage actor who won an Academy Award. In his career, he has played a range of roles in films and theater. He was not just an actor, but also a performer who wowed millions of viewers with his diverse range of abilities, frantic energy, flawless appearance, and charming demeanor.

Brynner was married four times, the first three of which were divorced. From his four marriages, he has four children.

Yul Brynner was born Yuliy Borisovich Briner in Vladivostok, Far Eastern Republic, on July 11, 1992. He was of mixed heritage, with Swiss-German, Russian, and Buryat ancestry, and Russian nationality.

Boris Yuliyevich Briner, a mining engineer, and Marousia Dimitrievna had a son named Brynner. Vera Bryne was his younger sister.

The father of Brynner had an extramarital affair. His father’s extramarital connection forced him to entrust his children to his mother, who relocated the family to Harbin, Manchuria. Brynner received his official education in a YMCA-run school there.

Fearing a war between China and Japan, Brynner’s mother moved to Paris in 1932. He developed a musical interest there and began playing guitar in Russian nightclubs.

Brynner trained as a trapeze acrobat and spent three years performing in a French circus. Due to a back problem, he was compelled to leave his work and start a new one. He began acting as a result of this.

Brynner and his mother immigrated to the United States in 1940 and settled in New York City.

Yul Brynner began his career as a French-speaking radio broadcaster and commentator at the Office of War Information in the United States during World War II, broadcasting propaganda to occupied France.

Brynner also studied acting under the tutelage of Russian acting instructor Michael Chekhov. After that, he went on a national tour with Chekhov’s theatrical ensemble.

Brynner made his stage debut in Shakespeare’s Twelfth Night, playing a minor role. Following that, he appeared in the television series ‘Mr. Jones and His Neighbor,’ and in the 1946 production of Lute Song with Mary Martin.

In addition to performing, Brynner embarked on a number of modeling jobs. With the new CBS TV studio, Studio One, he shifted his focus to direction. He also appeared on the first television talk show, ‘Mr & Mrs.,’ which aired in the United States. ‘Port of New York,’ a 1949 film noir crime picture, was his big-screen debut.

Brynner turned down acting offers while having a great career as a TV director. Brynner, however, gave in to Mary Martin’s insistence and auditioned for the role of ‘King’ in the 1947 American musical film ‘The King & I.’

He received widespread appreciation for his film ‘The King & I.’ In 1956, he starred in the film adaptation of King Mongkut, as well as a CBS television adaptation in 1972.

Following the popularity of ‘The King & I,’ Brynner went on to star in a number of other films. His roles in the films “The Ten Commandments” and “Anastasia” elevated him to celebrity status.

‘Solomon and Sheba,’ ‘Taras Bulba,’ ‘The Magnificent Seven,’ and ‘Kings of the Sun,’ among others, benefited from Brynner’s acting brilliance, exotic persona, and indefinable accent.’

Brynner’s acting career came to an end with the films ‘The Ultimate Warrior’ and ‘Death Rage,’ which he starred in at the end of his career. ‘Westworld’ by Michael Crichton and its sequel, ‘Futureworld,’ are among his most recent films.

Brynner’s abilities were not limited to acting and directing; he also dabbled in photography, writing, and playing the guitar.

‘The Yul Brynner Cookbook: Food Fit for the King and You’ and ‘Bring Forth the Children: A Journey to the Forgotten People of Europe and the Middle East were two of Brynner’s books published during his lifetime. Brynner’s images were used in both publications.

Yul Brynner had four marriages and had five children, two of them were adopted.

He married Virginia Gilmore, an actress, in 1994, and they had a son named Rock Yul Brynner together (born December 23, 1946). He called his son Rock after boxer Rocky Graziano when he was six years old.

The pair attempted everything they could to save their marriage, but in the end, they were divorced in 1960. Brynner later had a romantic relationship with Frankie Tilden, a woman 20 years his senior. With Tilden, he had a daughter named Lark Brynner.

On the set of The Magnificent Seven in 1960, Brynner married Doris Kleiner, a Chilean model. In 1967, they split up. He and Victoria Brynner had a daughter together (born November 1962).

In 1971, Brynner married for the third time, to a French socialite named Jacqueline Thion de la Chaume. With his then-wife, Jacqueline, he adopted two Vietnamese children, Mia and Melody, in 1974 and 1975.

In 1981, the couple divorced because they couldn’t deal with their relationship. However, it was reported that Brynner’s neglect of his wife and children was the cause of the divorce.

Brynner married Kathy Lee, a 28-year-younger woman when he was 62 years old.

The couple met on the set of The King and I in 1983 and married the following year. Yul Brynner passed away after a two-year relationship.

Brynner died in New York City on October 10, 1985, of lung cancer. He smoked a pack of cigarettes every day.

Anti-smoking public service announcements were broadcast on all major US television networks, as well as in many other countries, just a few days after his death.