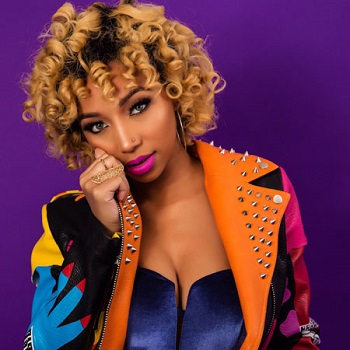 Miss Star, whose stage name is Zonnique Pullins, is an R&B singer best known for the song Pretty Hustle. She was previously a member of OMG Girlz (a girl group) with Breaunna Womack and Bahja Rodriguez.

On March 20, 1996, Zonnique Pullins was born to Zonnie Pullins (father) and Tameka Cottle (mother). Zonnique Jailee Pullins is her birth name, and her family refers to her as Nique Nique. Pullins is of Afro-American ethnicity and is of American nationality. Deyjah and Heiress Pullins are Pullins’ two sisters, and Messiah, King, Major, and Domani Pullins are his four brothers. Clifford Harris is her stepfather. Zonnique Pullins attended Henry W Grady High School for her education.

Zonnique Pullins has had a passion for singing since she was a child, thanks to her musician parents. Her mother saw her talent for singing and decided to form a musical group around her. Zonnique Pullins, Lourdes Rodriguez, Breaunna Womack, and Reginae Carter formed the all-girl music group ‘OMG Girlz’ in 2009.

Reginae Carter and Lourdes Rodriguez left the group after a few months of formation. The remaining three girls won a national competition and were given the opportunity to perform on the Scream Tour: Next Generation. After releasing a single, Gucci This, their group became well-known (Gucci That). They followed up with songs like Where The Boys At?, Baddie, and Lover Boy.

The band announced its disbandment in 2015. Nun For Free, Can’t Trust Em, Cool Kids, My Nigga was released the same year by Zonnique Pullins. Love Jones was released in 2017. In the meantime, Zonnique and her family appeared on T.I. & Tiny: The Family Hustle, a reality television show. From 2011 to 2017, the show aired.

Zonnique Pullins’ Salary and Net Worth

Zonnique Pullins, an American R&B singer, is estimated to have a net worth of around $500,000. She has gathered all of her net worth from the sales of her albums and her tour. Her mother, Tiny Harris, on the other hand, is worth $3 million. Zonnique bought a new house in 2018 when she was 22 years old, but the details of her new home are still unknown.

Pullins, who is 23 years old, is currently dating rapper Bandhunta Izzy. They started dating in the middle of 2018 and are still very romantic together. Zonnique Pullins was rumored to be pregnant in January 2019, but the singer did not respond to the rumor, which was later proven to be false. Prior to this, she was in a relationship with Damian Swann, an NFL player who currently plays for the Atlanta Legends. She also had an affair with Zoey Zuko, a musician, and rapper.